Santa Rosa was born in Viterbo, in the year 1233, from a very poor family. Once grown up, the poor economic conditions of the family will prevent the young Rosa from taking vows to become a nun. Despite poverty, the desire to profess the Franciscan values with which she was educated will be the aim of her short life. 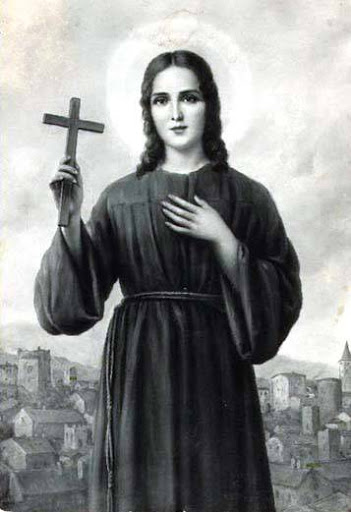 Rosa, in fact, will die at the age of 18 as a result of a severe congenital malformation. Fervent faith prompted her to profess her with such a determination that it did not escape to be noted by the powerful one of the time, who forced her and her family into exile. After his death in 1251, his grave in the bare earth became a place of veneration.

Subsequent miracles and frequent apparitions in a dream to Pope Alexander IV, who escaped from the Roman riots of the time and taking refuge in Viterbo (Pontifical seat from 1257 to 1281), fulfilled, albeit posthumously, Rosa's dream of accessing the nearby monastery of the Clarisse. It was September 4, 1258 and the translation of the body of the Saint to the Shrine dedicated to her, by a solemn procession, established a popular tradition that continued perpetually up to the present day.

In fact, since then, at 9.00 pm on September 3, the translation of the body of Santa Rosa is recalled with a series of costumed events, which culminate with the imposing transport of the Santa Rosa car through the streets of the historic center of Viterbo. The Santa Rosa Machine is a real bell tower that walks. The materials with which it is built have changed over the centuries, but the faith of the Viterbo citizen has remained intact for their holy child.

The Santa Rosa machine is about 30 meters high, weighs 5 tons and it is carried on the shoulder by 100 devotees, called porters of Santa Rosa. Seeing the bell tower, the only source of light, that walks through the dark streets of the city, feeling the physical effort that the devoted porters, who at step and united by the common desire to bring the Saint where she has always wanted to be, is an unforgettable experience that leaves you breathless.